Carrozzeria Nuova G.M. srl is a successful company that has developed a great “know-how” over the years in painting and restoration activities. Located in the core of sports cars and motorcycle producers as Ferrari, Maserati, Lamborghini and Ducati, since 1984 Nuova G.M. paints restores vehicles that require the highest quality standards, such as cars and sport bikes, special optional models, prototypes and vintage cars.

Carrozzeria Nuova G.M. srl was established in 1984 in Camposanto (MO), founded by Mario Pinca and Giuliano Polacchini as a traditional body shop for the repair of private cars and for sports cars finishing on behalf of Lamborghini and Bugatti. Following the continued commitment and excellent results, Nuova G.M. has managed to penetrate the market, and accrued strong collaborations with Lamborghini, Ferrari and Maserati.

In 1998, Nuova G.M began a new challenge in industrial painting by installing the first automated painting facility. Consisting of 3 booths: 2 automatic painting ROBOT (6-axis), and a manual. An (afterburner) treatment system of the output air was also installed, as required by the provisions for the environment.

In 2000, two additional automated painting systems were installed.
The first innovation is related to the implementation of a traction painting plant (composed of 5 booths and 4 anthropomorphic robots with 6 axes), specifically designed for the coating of small components of high-volume production. The second change was the installation of a rotative plant also provided with a 6 axis painting ROBOT. In this case the great flexibility of the system allowed us to produce spare parts and small lots. These investments led to new collaborations with Ducati, Piaggio and FIAT auto.

In November of 2001 G.M. Cataforesi srl was founded, a new company based 100m/109yds away from Nuova GM., thanks to the conception and effort of Mario Pinca, Ivan Caneva and Giuliano Polacchini. This new division works on the cataphoresis treatment at high thickness: a pioneer innovative technology in Italy.
This new activity enabled NGM to provide its customers a complete painting service, starting from a rough surface to the finishing phase.

Finally in 2009, we started a new project for a modern and innovative paint shop that will allow Nuova GM to reinforce its cooperation with Ferrari and Maserati by painting all special/innovative colors such as(mat, pearly, water based paint tests ). The new plant was strategically built next to the cataphoresis plant, that is able to produce bodyworks complete with hang-on parts.
The plant is divided into 3 main areas: the preparation area with vacuum booths, the painting area with 4 painting booths and 2 ovens, and the finishing area with a specialized polish box and an adequate light system. Moreover, and of no less importance, an analysis laboratory was introduced where processes and products can be analyzed and studied.
To fulfill the continuous requests from our clients to gain better esthetic results after cataphoresis treatment, a new powder paint system was implemented at the beginning of 2012. This was installed adjacent to the GM cataphoresis plant, and is managed by the later.
The powder coating plant consists of an automatic heater, a nano-technology based washing tunnel, a painting booth and a high-temperature oven. A static system was also set up for large components.

At the end of 2012 we purchased an automatic scrubber to clean surfaces in the loose paint shop and to reduce the problems related to impurities.

In 2013 we extended the bodywork painting area by introducing an automated painting plant consisting of: 4 painting booths, two of which are equipped with double rapid colour change ROBOTS, a preparation and masking area, a finishing and control area. Two convectors were installed outside the plant: one to handle the vehicle body outfit and one for the delivery phase, the latter equipped with arcs light designed for the detection of surface defects and tint. This is to guarantee a process approach in line with current international standards.

In the first half of 2014, we finished updating one of the loose paint shops by installing new ROBOTS with an off-line program for the design of routes. Furthermore we have added a flaming ROBOT in order to obtain a more stable process on certain types of plastic (e.g. polypropylene). 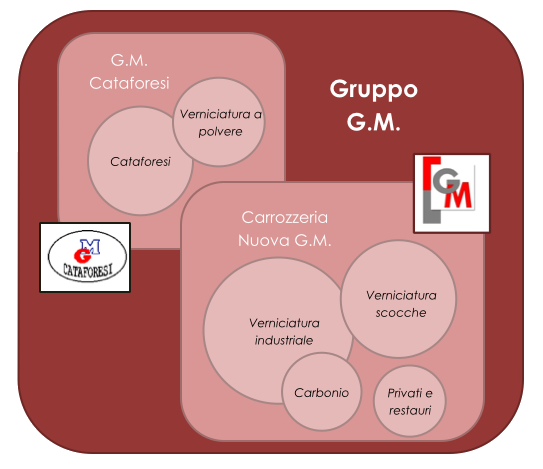 Carrozzeria Nuova G.M. srl achieved the certification of conformity to ISO 16949: 2002 and 9001:2008. This standard certifies the system of quality management for the design and development, production and, when relevant, installation and servicing of automotive-related products.

We are quality certified confirming the commitment of the company to formalizing procedures that allow us to reach the high quality standards in accordance with customer specifications.